I have been on a spiritual quest for many years. I have studied most of the major world religions as well as many Native American traditions. In my quest I found Unitarian Universalism as a place I can call my spiritual home. For many years I have been involved in social justice issues. Being a gay man as well as the father of a black daughter I have a special interest in LGBTQ+, racial equality issues, and women’s equality. I have a long work history in health care and have worked with the underserved. I am a strong supporter of community service and providing a living wage and equal health care for everyone.
I plan to bring my experience into my work in the DRE position. I hope to draw on the knowledge and experience of those who came before me and the great volunteers who assist me.

Our minister Rev. Jim McConnell provides 18-36 thought-provoking services per year in which he draws from his extensive knowledge of how various cultures experience and communicate the mysteries of the universe. He serves on the Board of the Berrien County Association of Churches and is active in many community events. He leads our volunteers in preparing and serving lunch at the Benton Harbor Soup Kitchen and helped create the Social Justice Coalition of which BUUF is a charter member. Jim also provides pastoral care and is available for baby-naming ceremonies, weddings, and memorial services.

Gretchen Ohmann has been a UU since she and her late husband Pat joined BUUF in the 1980s. Jumping into women's spirituality after Roz and Gloria convinced her to attend a UU women's retreat in the 90s, she has since led workshops and singing circles, and has helped plan UU women's events in the midwest and southwest regions of the US as well as at the national level. She is currently a board member of Continental UU Women & Religion (www.uuwr.org) and UU Women’s Federation (www.uuwf.org). An avid proponent of the Red Tent movement and the ongoing need for womyn's circles, she has also faciitated Cakes for the Queen of Heaven classes and trainings.

Gretchen is a website developer whose day job is tech coordinator for the UUA’s MidAmerica Region. She spends her spare time with her daughter and son-in-law and 2 grandkids. 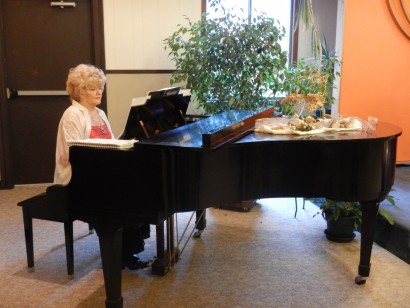 Candace Onweller is our pianist most Sundays. She is also available for private lessons and holds an annual recital at BUUF each spring. When possible, live music is offered on Sundays when Candace is not at the piano, using members of our BUUF Jam Session.