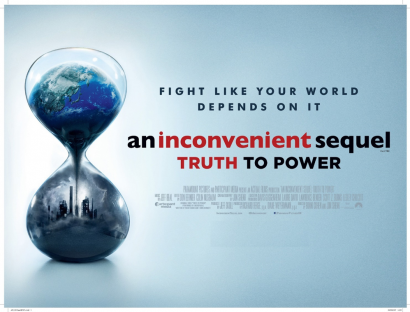 The next film in our Environmental Justice Film Series will be shown on Thursday, August 15 at 7:00 PM.

(2017) A sequel to The Inconvenient Truth, this follow-up documentary addresses the progress made to tackle the problem of climate change and Al Gore’s global efforts to persuade governmental leaders to invest in renewable energy, culminating in the landmark signing of 2016’s Paris Climate Agreement. The film is 97 minutes, and after we watch it, we’ll discuss what actions we can take on this and other environmental justice issues.

This event is hosted by Berrien UU Board Member Harvey Johnson and is free and open to the public. Free popcorn is included; BYOB encouraged. Doors open at 6:30 PM, so come early, get yourself settled and enjoy some popcorn before the show begins at 7:00!